Biden is tweeting about being together and working together. SM Groups are saying … “all this guy does is tweet and use us to remain power to loot by the trillions … let's impeach the fraud.”

Why is this so? Here's one small example. 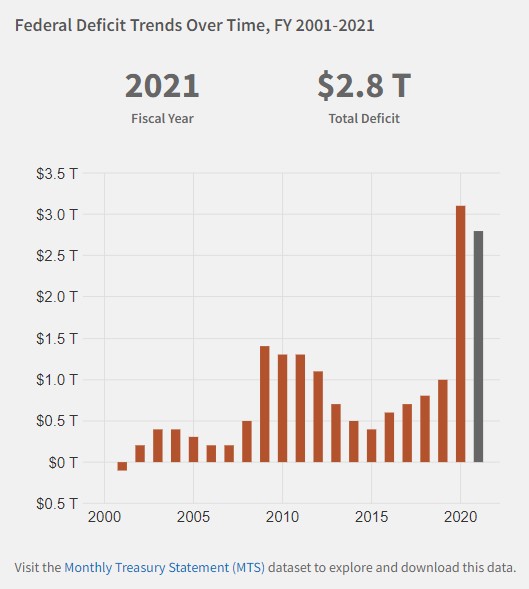 Bush is an excellent scale for comparison. Bush's record in budget deficits … ranged from $200 billion to $400 billion at a max.

Impeach the frauds
It’s a fact by numbers that our chosen Presidents are 10 times worse than Bush in so many ways. Why are they like this? Because they don't know shit … they have no idea what the problem is … and they don’t know how to solve the problem.

Secondly, they say whatever needs to be said to get the power … once they get the power, they go on a looting spree profiteering from the Presidency and don’t give a shit about solving any problem. The crises only multiply because they are never worked upon and our chosen Presidents are busy on their looting spree.

When SM Groups see that … this is what's going on … then they automatically remove and / or impeach the frauds.

On the ground forces
Let’s give an overview to Mr. Biden about the 3 main forces that try to run the country.

The game is 2 positive forces against 1 negative force … supposed to be … SM and the Presidency … against the Establishment.

SM - an alternate force of managing the Nation
SM has its own network … its own agenda … and its own objectives … just like the President has his Administration … his agenda and his objectives.

Integration of SM and the Presidency
SM has a people centric agenda of … dismantling of the Establishment, creating new systems and reforms is the SM agenda. The closer the President is to the SM agenda … more the activities he works on … more the support and success he gets as President.

The farther away the President is from the SM agenda … more the party puppetry, Establishment puppetry and trillions of loot of the country is there … more the loss of support and failures he gets as President.

Take a look at the graph and see how you are performing compared to Bush … do we need to support your Presidency or terminate it?

SM chose you for a people centric agenda … to dismantle the Establishment and to create great reforms … and you have become a fraud and a traitor … you are running complete party puppetry and carrying out trillions of loot of the country.

The only thing that you do is sit there and tweet that … "let's do this … we are together" and bla bla bla … and then you continue with your own same old bullshit leadership of screwing the country.

Sandwiched between SM and the Presidency
I direct strategies … I don't deal with just the Presidency … on the other side, I also deal with an array of SM Groups … each group with their own agenda. I have to give strategies to both realms.

Designing consequences for frauds and traitors
Some of the tools that SM Groups use to deal with frauds and traitors are … lawsuits, investigations, indictments, convictions, jail time, impeachment and also complete removal from power. These guys overthrow complete governments let alone impeaching a President or a key leader … they have knocked the hell out of Netanyahu, a Jewish Prime Minister on Jewish land, the land owned by Jewish bankers.

Seeing the fraud that Biden has become … what some SM Groups are asking me is … how many times should we impeach Biden?

"Impeaching the fraud" is trending among several Pro-Trump and Anti-Biden Groups. Don't blame me … if you lose the House or Senate … and then get impeached.

Look what's happening to Trump 3 years later … isn't he getting investigated? Doesn't he have lawsuits against him? Isn't he blowing up cash to stay out of jail?

Trump always thought that I made it happen … that I am the one who is doing it … when in reality, I was the one sharing the planning of some SM Groups to give him a heads up to save him.

Don't think that … all of these lawsuits, investigations, impeachment, indictments or convictions are from me. I am complete zero at the ground level … I don't implement anything. I only strategize and manage extreme moves from some SM Groups.

Today, you are standing there … making some tweets as usual … about working together … which you never have … and you are expecting SM support in the elections to help you remain in power. But the reality on the other side today is … they are saying … “screw Biden's tweets … let's impeach the fraud.”

This is what will help you

If you reach to at least Step Three … then I can help you. You are sitting there and tweeting … where is sitting, tweeting and not doing anything in the program? It is not a part of the process.

Follow the process … and I will have a reason to stand up for you … to protect you and your Presidency. I can pull SM in your favor … provided you show the right fight.

Here is some news for you. Take a look at the below graph.

It shows a few interesting things …

Biden thinks that Trump is his alternative ... he thinks that he is better than Trump ... and thus, he should get re-elected.

Mr. Biden ... its quite unlikely that you have will any political alternative in 2024. The alternative that many SM Groups want for you is ... chilling at home with your family. If you continue on your current track ... you won't be there in the Presidential race for 2024.

And don't worry, if you continue to screw America ... it is not necessary that we will switch back to Trump. God willing, we will prepare for and get a leader much better than both of you combined.

This is one of the main reasons why SM Groups are asking me to strategize the creation of the next Democrat President. They want both Biden and Trump flushed out of the White House. Trump is already gone and you are next in line to get flushed out.

If you want anything to move in your favor ... this is what you need to keep in mind.

Barack Obama. Your Boss himself didn't know how to solve any of these crises. He had 8 years in office and he ended up with a zero legacy. This online coordination that you are trying to do ... this is what Obama did. He was all about signals and indirect interaction.

He didn't solve any crisis nor does he have any solutions either. If you follow him, you will also end up not solving any crisis and get flushed out of the White House. Obama got two terms ... but you will not have that luxury. Trump himself was flushed out in a single term.

You might be thinking that ... you are following Obama and thus, you will get re-elected ... and you will sit there bullshitting for another term ... then, you are seriously mistaken. SM is extremely dynamic now ... the Obama Era was different ... there were reasons to support Obama.

Donald Trump. And your Guru Trump ... he was two times worse than Obama. He also flunked and created double the debt per year than Obama. He also doesn't know anything. He was flushed out because of his inaction and loot of trillions. If you follow him, even he will screw your Presidency.

As of now, your Presidency shows the flaws of both ... Obama and Trump. You show Obama's inaction and party puppetry ... and Trump's loot of trillions and no action on the Establishment. You are not providing Presidential leadership ... but you are providing America with the flaws of both of the previous Presidencies. That's why, we have multiple crises in the world under your Royal leadership.

"Compare me with the alternative?" You are a super-screw-up when compared to any previous President, to be honest. I will not flush you out of the White House ... but SM will. But what I can do very successfully is ... guide you and help you save your Presidency.

That's why, we are telling you again and again ... stop being a parasite on us ... it didn't help Obama and Trump. You need to coordinate, understand the crises and show a fight for the people ... its only then there will be support for your Presidency. Otherwise, nobody is going to sit there, like a fool, believing in your bogus tweets ... nobody is going to support your screwed up Presidency.